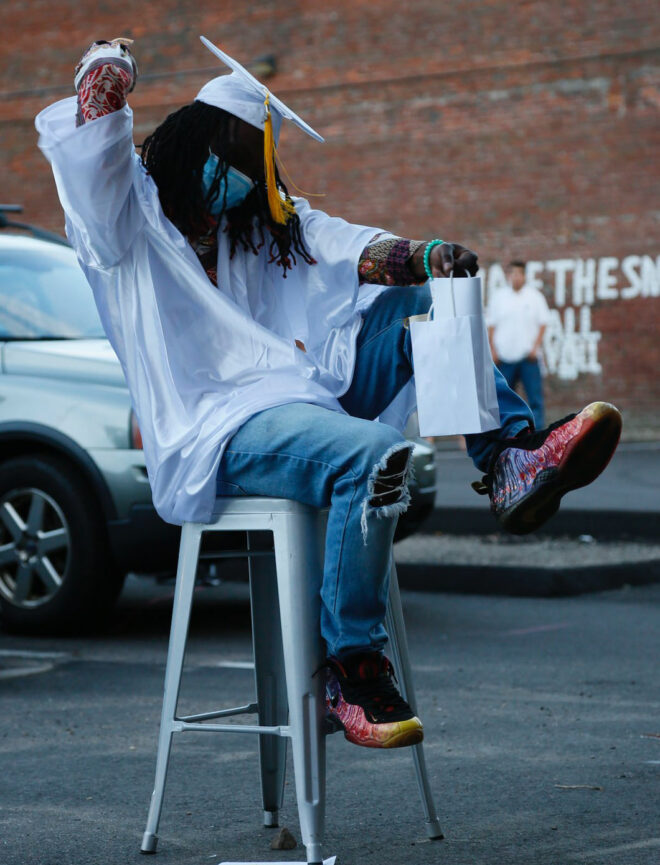 Graduation this year was deeply moving. One student, Georgia, was one of my first students. She’s stunningly perceptive, both rationally and socioemotionally. She was a gang member when she came to us, handling daily contempt and violence as part of the school system.

It was only a few months before she was running around, bringing kids back into school when they were wandering off to skip. But though she was an increasingly enthusiastic member of our community, she never wanted her picture taken. “I got enemies,” she said.

She didn’t want them to know where she was. She didn’t even want anyone to know that she was in school.

In my first class, a game design class, she designed a game that was overreliant on luck (something that students have to face at a college level, even) and then embraced processes of choice as soon as she could see how to implement them. When I showed her how small differences in starting conditions can skew a game toward one player or another, she instantly understood the implications of that for her own life.

Georgia came to us with one objective: to graduate high school. It was something she couldn’t see herself succeeding in. She had little support from her family, who also believed she wouldn’t be able to do it.

She’d come into my class, casually learn how to do something (she learned how to solder electrical circuits on the first try), then get bored and want to do something else.

“You,” I told her once, “have smart people problems. You’re used to everything being easier for you than it is for everyone around you, so when things get hard, you don’t know how to face it.”

She laughed, and said, “Ha, you said ‘smart people problems’!” like I’d misspoken.

“Yeah,” I said. “You’re extremely intelligent. You grasp things that are hard to see and do.”

She didn’t know what to say. Normally, I don’t praise students’ intelligence or other natural attributes. I want them to know that we, the teachers, accept their nature without reservation. But what we admire is when kids learn, practice compassion, and show courage.

But no one had ever told her that she has capabilities before.

At the winter party last year, she suddenly threw herself into a staff photo.

“All my enemies,” she said with utter glee, “are dead, in prison, or crackheads!”

Then, this year she became suddenly hard to communicate with. I couldn’t tell if it was something I’d done, but I’d check in with her through other teachers. She was struggling, but still showing up.

I found out last week that she was embarrassed that she wouldn’t graduate. She was ashamed about how disappointed she thought we all would be in her. That’s why she’d been hard to communicate with.

She’d been texting essays to the director. She still didn’t believe it. Her mom was speechless when she found out that she could graduate. It had never occurred to her mom that she might succeed.

I’m proud of my students graduating. But this kid, man. We’ve all expressed that we want her to be back, and are figuring out ways to make sure she gets paid to be there in the school. Now that her graduation is out of the way, I’m hoping that she can concentrate on learning.

Because she’s really good at it and school can’t stop her anymore.