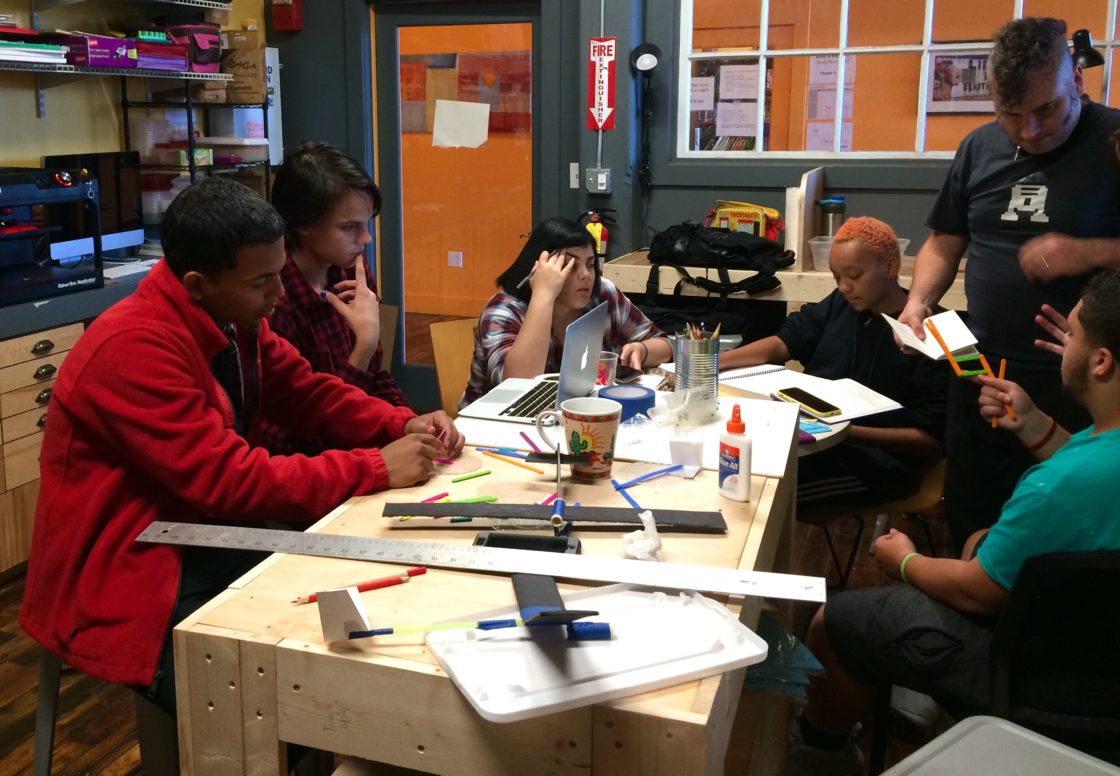 This block, I’m teaching a new class I’m calling Making Math from Scratch. It’s where I use my fundamental principles of education — that learning happens best when a student can play — to come to an understanding of ratios (and therefore most math) through geometry and trigonometry.

The main challenge I’m facing is that, for the most part, kids’ experience of math is that it’s taught in a really mean way. It’s taught in a way that is designed to cream kids who have a talent for the way it’s expressed, to separate them into a different educational category and then shame the rest of them out of studying it at all.

It will take me a little while to get my pedagogical feet under me, but the principles I’m working with are these:

So far, we’ve only had a couple of classes. It’s been extremely difficult, primarily because of the emotional duress the subject puts on traumatized students.

Alvaro, from the previous post, is having a really hard time. It’s not that he can’t understand, because he can. It’s that the subject is emotionally very difficult for him. I’ll be writing more about him soon because he’s having a very particular kind of hard time.

Faith is a new student at the school. She wants to become a photographer, and, because I asked for the kids who were having the hardest time in math, I got her. Math class is past the edge of her comfort zone, but she’s showing up for class every day, however difficult it is.

There are several students who already have no small talent. One, Carla, works with me alone in an adjacent room, learning trigonometry. She asks me about things, we draw out the problem, and then, over the next several minutes, she explains it to me. She figured out how arcsin works empirically.

Another, Danny, is happiest just doing exercises from a textbook. They’re pretty dedicated to it, in fact. They’re a creative, exploratory, highly social kid.

Enrique is pretty happy about working with Ben, who worked together with Alvaro over the summer. Ben is in class primarily to learn how to express ideas. He has no small talent in math and programming, and I’m helping him learn how to teach and communicate about them. Enrique is somewhere on the spectrum, and is really happy to have positive human contact and he loves coming to LightHouse. He’s had a pretty rough life, but he’s very sweet, smart, and creative.

But again, the core issues are emotional.

Alvaro is consistently defensively disruptive. Another student came to class high once (which was a little exhausting, but they actually did great, which tells me some very valuable things.) Our challenges are cut out for us.

I’ll be writing more about them as I find words to put to the experiences. Suffice to say, I’m coming home really tired.