The practice of art is valuable not only because of the artifacts it produces, but because of the requirements it places on the artist to observe. In attempting to represent a phenomenon, the artist must look at it closely enough that it can surprise them. The resulting artifact is a record of the artist learning to see anew — a record that an observer can then play back by looking closely at the artist’s decisions, both intentional and unintentional.

My projects, from the physiological to the philological, center around the observe/create/observe feedback loop. My goal is to sufficiently understand the ideas that I can play with them creatively, and by playing with them understand what the product of play represents in the world.

The isisaurus is a sauropod that, at 18m long, is relatively small for its clade. From the few bones that we have, we know that it was odd in other ways, too. The possible hyaena posture attracted me to the creature, and I speculate that it used its thick, powerful neck in a manner similar to a giraffe, as display or outright dueling with rivals.

This model is about 45cm long, making it about 1:40 scale. Like all of these sculptures, it’s made of polyclay, aluminum wire & foil, and a piece of 2×4.

The Language of Names

This is the alphabet of the Language of Names from Lover of Jet & Gold. It is designed to imply a syncretic origin, drawing heavily from Hieratic, Phoenician, and Hebrew alphabets. You can see here both an abcdario and an example of a “name deal,” written grammatically (if with a critical error, described in the article about the language). These examples are in ink on papyrus. 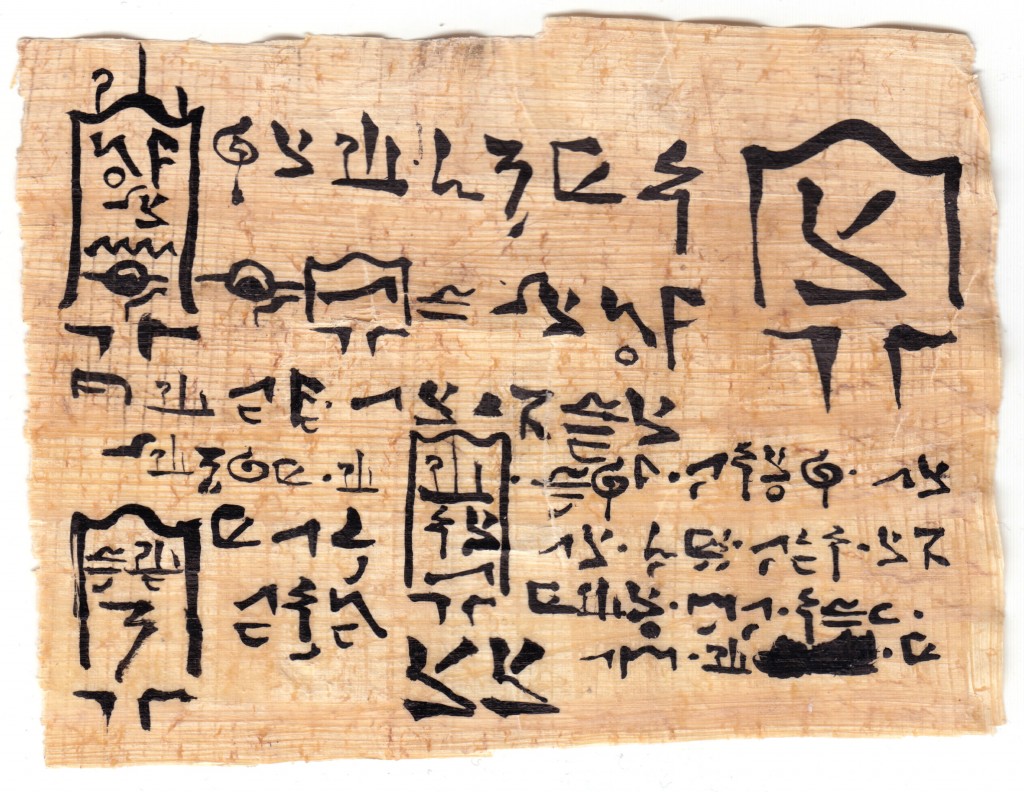 Ashu, the Ibis of Dawn, Healer of the Sun

Ashu is a character — or, rather, two characters — from my illustrated story, Adabi and the Crown of Fingers published serially on xenoglyph.

Above its gaping maw that it uses to suck up plankton from the riverbed protrudes the paddle-like proboscis that gives it its name. This paddle is dotted with electrically sensitive nerve endings that can sense when there are plankton in the mud, and then the fish uses it to stir the river bed, drawing the silt through the creature’s filters.

This is a real fish that really exists.

The gigantoraptor lived around the same time at the isisaur above, though they probably never actually met. I’m speculating here on the feathers (of which there is no direct evidence, but no reason to doubt), and have given it winglike hands covered in netlike feathers for grabbing insects and pterosaurs on the wing. The index finger is bare, and used for picking at carcasses and grooming.

Homo Sapiens Sapiens lived for a brief period on Earth at the end of the Cenzoic. It used its substantial cranial capacity for arguing with strangers on Facebook.

This model stands about 20 cm tall. Its hands are about the size of a penny.

Ashlesan Warrior of the Southern Heart

In 2009, I did a speculative zoölogy project called Ashlesa. Among the lifeforms of one of the moons of the Ashelsa system was a species called the Warriors of the Southern Heart. They’re absurd creatures that appear self-important to us the way penguins do.

I made this sculpture of one creature, displaying its herd colors and prepared to engage in its nudibranch-inspired mating/fighting behavior.

It’s polychromed with acrylic paints, but is otherwise materially identical to the other sculptures here.

You can see sculpting process and zoölogical description of the Warriors at xenoglyph.

The quetzalcoatlus northropi is the largest known flying animal. There are piloted aircraft that are smaller. I’ve here given it a skin texture that I now realize is inaccurate; it was likely covered in hairs that probably would have turbulated its lifting surfaces, reducing its stall speed. The bold stripes are my speculation, assuming that such a large creature eating shellfish might have territorial waters, warning away others of its kind in the sky, while its underside is less alarming so as not to raise the suspicions of prey below the surface. 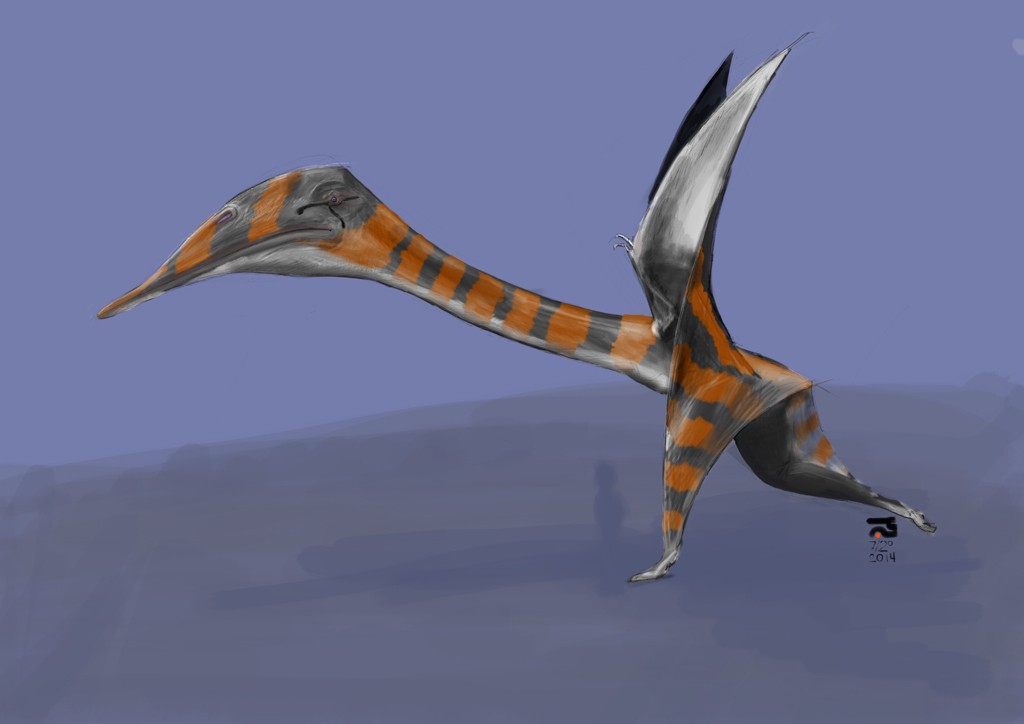 Kefo-Rn, the language of the Academy

In my 2010 tabletop roleplaying game Human Contact, I described the features, capabilities, and limits of Academic language, Kefo-Rn. The game also includes a chapter on creating fictional languages as a feature of the cultures the players are creating.

Below is the Academic syllabary, which has the characteristics one might assume of a constructed language that has been subject to natural linguistic evolution for several centuries. 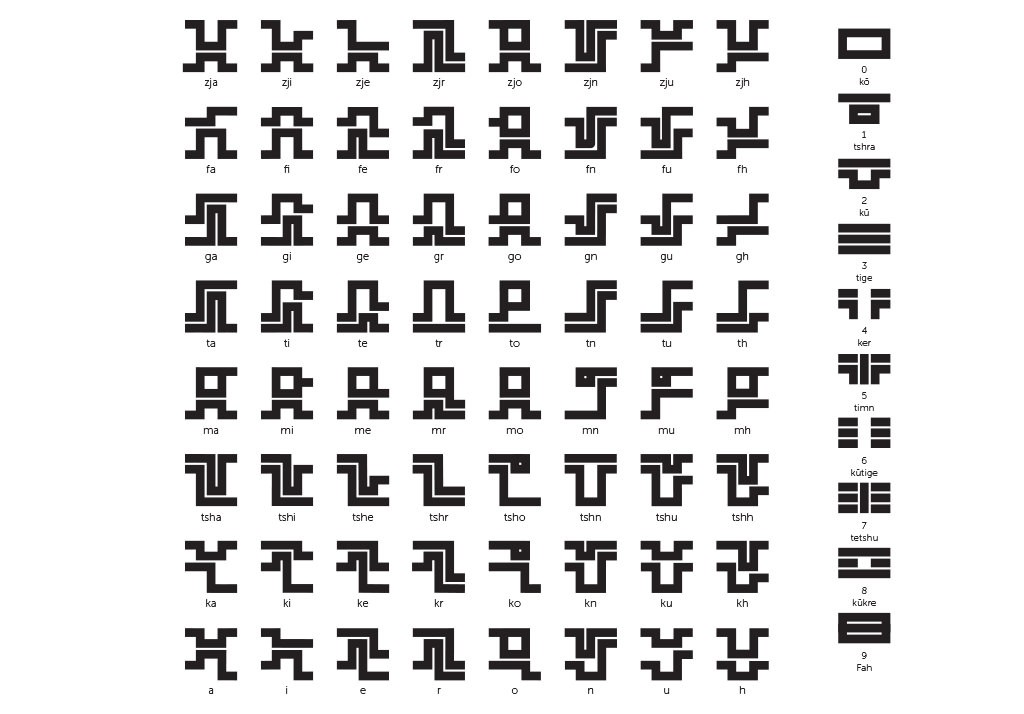