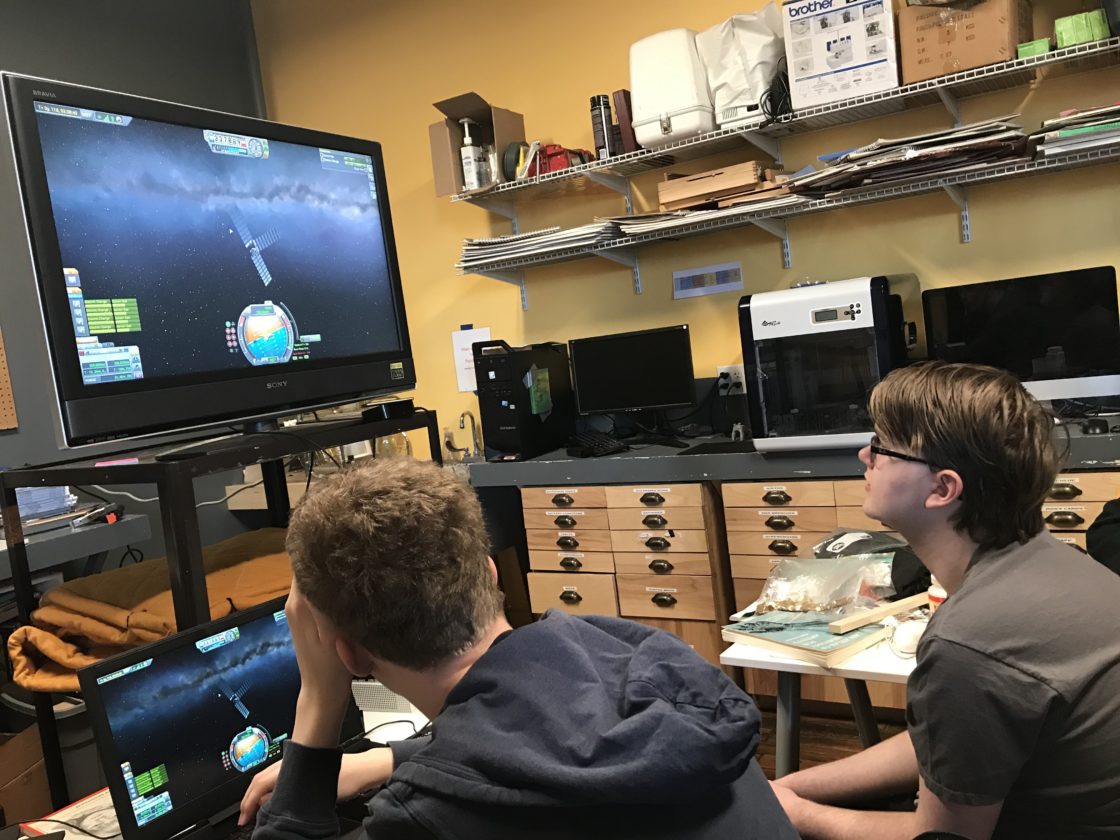 This block at LightHouse (go donate! That’s one of my students at the bottom of the page!), I’ve been teaching a class I call Rocket Science Isn’t Rocket Science. We play Kerbal Space Program as a space program, making decisions by consensus. The class has two sets of objectives — an overt one and a subtle, quiet one.

The overt one is what you’d expect. We talk about the Rocket Equation — how to make a rocket require a finite mass in order to move; and we talk about orbital dynamics — why slowing down makes you go around the orbit faster and vice-versa. And we talk about thrust versus specific impulse — that is, how fast you speed up versus how fast you can get going. This stuff is all super-interesting and counts as science credits for students who need credits to graduate.

Throughout this blog, I refer to students (and I guess anyone else) as their own stated gender with the pronouns they express. Very often, I’m talking about someone’s gender training and its social effects. In some cases that training is from their family, but in some cases, the students have had to build their own gender training without sufficient support. In this article, I’m mostly talking about a set of students with immature but longtime training in masculinity — boys.

But the other function of the class, and the reason it’s continuing into the next block, is that the class is almost entirely made of boys, and it’s a huge opportunity for them to remediate some of their less-social habits. To a one, they are positive, kind, creative kids. But they need practice with some critical, prosocial skills: collaborative listening, emotional support, and valuing gracefulness.

When there’s a problem to solve (and Kerbal Space Program is a game about engineering, so it’s all problems to solve), most of the students have an idea about how to solve it. In classes where I have more girls, they’ll often solve a problem by listening to each other, looking at each other’s creations and waiting until someone asks them about it to explain what they’re doing. Though they elected at the beginning of class to make all decisions by consensus, the boys’ training has been different.

Please SUBSCRIBE so I can keep teaching & writing about it!

They each clamor to be heard, to make the case that their idea gets acknowledged. In most cases, their ideas are good ideas (with plenty of jokes thrown in). But they’re immature ideas. We’re often trying to solve several problems at once and no one’s idea is the one idea that will solve everything.

Exacerbating the issue is that some of the students have the game at home and have been getting much better at it. Their input comes with greater experience, but their training tells them to assert that over everyone else’s input because their decisions are maybe 10% better.

If they listened, the ideas could be 90% better, instead.

The results of not listening are not just hurt feelings and the (mild) alienation of the one girl who joined the class at the beginning (a girl who very quickly proved to be one of the most able pilots in the class, I might add). The results of not listening are objective engineering failures. Crashed spacecraft. Missions lost in space after hours of work. Dead Kerbals (our policy is to try to keep everyone alive, which is quite hard. Our record is 43 days without a fatal crash).

Now that we’re doing online classes, we’ve moved to Discord, which is unusually appropriate for a class centered on a video game. However, it means that one student has all the controls. And, while he’s quite good, he still makes mistakes with predictable consequences because there’s a lot to get right, and often forgetting one little piece of equipment or thinking about one problem slightly wrong can mean total failure of the mission after hours of everyone’s efforts.

I want the students to be able to take pride in what they are doing and learning, but boys are taught, subtly or explicitly, that pride is zero-sum game. They’ve learned to compare things that they’re proud of and then, for reasons unclear to me, declare a single winner of the conversation.

But there is no restricted access to self-worth. Their solutions in the game each need listening for the objective reasons I stated above. But it’s more important that they learn how to communicate in such a way that they elevate each other. That they operate in an environment where their dignity is post-scarcity and they can recognize that denigration reduces the overall wellbeing of your group; that there need not be an equal and opposite reaction to assuring and helping each other just talk through an idea.

They do a lot of cheering for each other’s hard work already: not only for successful dockings and landings, but also successful aborts and even hard-fought crashes and errors. It’s a powerful first step.

In the age I’m teaching, boys grow really fast. My students range from less than five feet to over six feet. That change in size brings a demoralizing loss of bodily control, and these kids have a hard time doing things delicately. Were their training different, they’d be sewing, cooking, handwriting, learning to draw. And the kids who are best at these things have not physically grown that quickly (though it’s still quite startling. Sometimes I think they’ve grown between Tuesday and Thursday class).

The result has often been a defensive doubling down, an admiration for “raw power” and “setting things on fire.” But, as we discuss a lot in my class, raw power is power that’s useless. It just goes wherever, and probably wrecks whatever you were trying to do. One of the Makerspace principles we talk about all the time is, The more energy you are releasing, the more gracefully you must release it.

Likewise, I will often tell students, “Eh, something will catch fire no matter what because you’ll have made a mistake. And then it will smell bad and you’ll have burned your hand. Catching on fire is what happens when we mess up anyway, so we don’t need to side with entropy.”

Appreciating grace not only helps these boys appreciate the skills girls have been training in (skills that give them a huge leg up when they learn how to solder or sculpt), but also gives them a way that they can start to focus their own mastery. They’ve been taught to make demands and destroy things if they don’t get their demands (in tension with threats and demands from others, almost all of whom are more powerful than the kids are because they’re still kids.)

I want them to value delicacy and emulate that which they see in others.

This block ends next Thursday, so our current mission to Minmus will end then, possibly with the beginnings of a fueling base. After that, I’m making some subtle game design changes to the way things work in class, with the hopes of enhancing the socioemotional aspects of the students’ play.